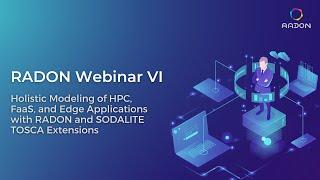 Topology and Orchestration Specification for Cloud Applications (TOSCA) enables users to manage the entire lifecycle of application and network services, from initial service design through service deployment all the way to ongoing service management. TOSCA is widely used and vendor independent. It works across multiple clouds and network technologies, which allows architects to focus on application design and requirements without being bogged down by the ever-changing specificity of the infrastructure.

The OASIS Open TOSCA technical development team brings you this unique opportunity to learn how TOSCA is used for real-world application and deployment scenarios. Leading developers and users of TOSCA have agreed to share their experiences with the broader community during a 2021 webinar series. They will show demonstrations of TOSCA-based systems and examples of TOSCA service templates. They’ll also explain the unique benefits of TOSCA for their application domains. The series will span over 6 months featuring monthly implementation stories leading up to the release of TOSCA 2.0, which has improved the standard to further align it with modern development paradigms, including cloud-native and microservices.

The webinar "Holistic Modeling of HPC, FaaS, and Edge Applications with RADON and SODALITE TOSCA Extensions" is a collaboration with the RADON Project. The webinar will focus on presenting the overview of the TOSCA extensions defined by the RADON project and the SODALITE project, which both enable such heterogeneous deployments. You will get to know how, by joining forces, these projects have holistically integrated these extensions and the modeling and orchestration toolchain that can leverage them.

See the recording below: